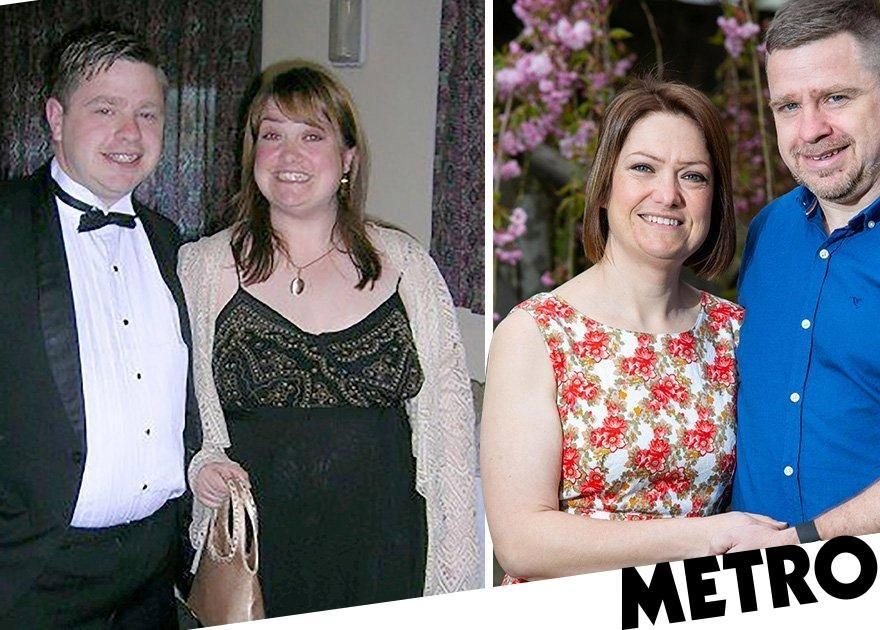 Civil servant Mark added: ‘My weight had crept up over the years and I’d gotten to around 16 stone, so I signed up for the coach to 5k and noticed shooting pains just below my knee.

‘I could run, but then as soon as I stopped I was in absolute agony.

‘I went to the doctors in 2016 and they also referred me to WW, so I thought I’d give it a go – especially after I’d seen how great it was for Nicky.

‘The more weight I lost, the less pain I had.

‘The difference it was making was immediately obvious. It was so helpful.’

Nicky said she has had problems with her weight ‘for as long as I can remember’ and they are unrecognisable from the wedding snaps taken 15 years ago.

Nicky said: ‘My mum was the same. We didn’t have a good relationship with food at all.

‘Throughout my teens I would try all sorts of diets and even when I did lose a bit of weight it never stuck.’

After giving birth to their first daughter Poppy, now 12, Nicky managed to lose six stone – but in an unhealthy way, by skipping meals and starving herself.

‘It wasn’t sustainable,’ she said.

‘I wasn’t eating nearly enough and as soon as I started to eat normally again the weight just piled back on – and more!’

But when her mum Janet died of oesophageal cancer in 2011, Nicky vowed to get healthy.

She said: ‘I’d always told my mum I’d sort myself out and I was determined to stick to that.

‘I never wanted my daughters to be the same as us with food, so I needed to be a good example.

‘I was in such deep grief that I didn’t start properly for two years, but I went to my GP and got a referral for WW.

‘I really threw myself into it – and my life changed almost immediately. For the first time, I felt like I had the tools to control myself better.’

Mark noticed the changes in Nicky too, commenting on her newfound confidence

He followed suit in 2016 after being inspired by his wife’s journey and has lost nearly three stone with the slimming group.

The duo also found a love for exercise, and started going to running events together, and have tackled 10k runs.

Nicky, who has become a weight loss consultant said: ‘I’d always been terrified of exercise.

‘I had no belief in myself at all and didn’t think I could do anything.

‘But once I started running it was like a magic wand. Each week it got easier and it soon became me-time – a time I could switch off and think about nothing.’

But the family make sure to enjoy an occasional treat.

‘We’ll still enjoy a treat every now and then,’ Nicky said.

‘Our girls love fish and chips, so we’ll get one big portion between us all and split it.

‘It’s more than enough – and saves the pounds on the waist and the pounds in the purse!’

MORE: You Don’t Look Sick: ‘I get told to take the stairs because I look healthy but I have stage four cancer’