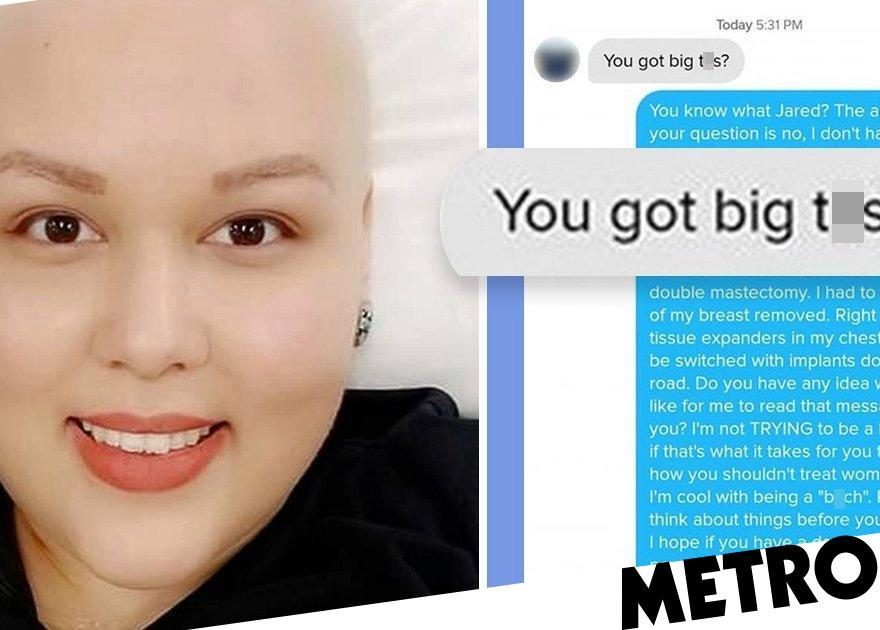 Krista Dunzy was appalled by a man’s shocking comment about her chest on a dating app.

The 32-year-old charity worker from Oklahoma, U.S, who had a double mastectomy due to breast cancer, was asked by a man on Tinder if she had ‘big t*ts’.

Naturally, Krista was raging. After being diagnosed with stage two invasive ductal cancer affecting the milk ducts, she had both breasts removed.

The unexpected message came from the sender, Jared, out of the blue and while Krista was personally offended, she was also angered that he may approach other women in the same rude way.

When she confronted him, explaining her battle with the illness, he called her a ‘dumb b*tch’ and told her to stop acting like a feminist.

Furious with his ‘lack of human decency’, Krista hit back with a detailed account of her breast cancer battle and how it had resulted in a double mastectomy.

The brazen sender told her to stop acting like a feminist as that ‘gets you nowhere in life’.

Even when Krista asked how he could send such a thoughtless message he proclaimed he ‘makes his own rules’.

‘When I read the message my first reaction was anger,’ she said.

‘I don’t need a reminder of what has happened to my breasts. I see the scars across my chest every single day.

‘The issue isn’t with my lack of breasts due to breast cancer though, it’s the lack of respect and human decency from him.

‘I was hurt because he was so insistent, even when I told him my story.’

She added that their conversation didn’t go any further and it was offputting, seeing as dating has been hard for her due to her health troubles.

But she’s not surprised by the behaviour.

‘I don’t want Jared to treat another woman or girl like that ever again,’ said Krista.

‘When it comes down to it, I want people to see that this is something women deal with on a daily basis. I don’t want the blatant disrespect Jared showed to be normalised.

‘Ultimately, I want women to feel empowered enough to stand up for themselves when someone makes them uncomfortable or is outright disrespectful.

‘We owe it to ourselves to speak our truths and stand up for ourselves.’

The comments were triggering for Krista, who says she’s more than her breasts or her hair which she lost during chemotherapy.

After supporting her mum and aunt through cancer, Krista underwent 16 rounds of chemotherapy, 13 rounds of radiotherapy and had a double mastectomy nine days after her 26th birthday.

The health issues have made her reluctant to date.

‘It’s hard to put yourself out there and be vulnerable,’ she said. ‘You never know how people are going to react when you tell them things on that level.

‘To be diagnosed with breast cancer was really hard. Really difficult.

‘But I’m not my hair or my breasts. I’m me. Those things don’t define me at all, whatsoever. I wish people could realise that too. They’re so insignificant in the bigger picture.

‘I didn’t say what I said to him for him to apologise or feel bad about himself, I did it for him to learn. I’ve already found peace with my diagnosis and I’m okay now.

‘But if by changing men’s minds about how they treat women, I would do it all over again.”

Since her messages went viral online, people have vowed support, even offering to take her for a beer if she’s in the neighbourhood.

As for dating, Krista is still hopeful: ‘Dating after the surgery does make me nervous but I know eventually I’ll find someone who treats me well and he’ll be worth the wait.’