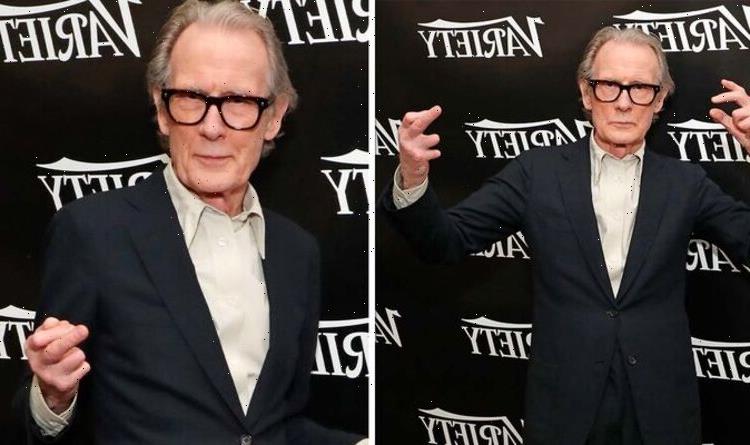 This Morning: Bill Nighy jokes with Phil and Holly about Marmite

In most of the films he’s in, Nighy’s pinky and ring fingers are curled up close together. While his audience might be confused by it, the appearance gains praise from young actors who complement the “thing” he does with his hands, he told The Guardian. But it has nothing to do with his acting. The star, most famous for Love Actually, has a condition some experts believe is of Viking origins – Dupuytren’s contracture.

The condition causes an abnormal thickening of the connective tissue in the hand at the base of the fingers, making the affected fingers stuck in position.

Nighy developed Dupuytren’s in his early 20s but, as it does with most people, it worsened over time.

“It started in my 20s. It was alarming and I should have had an operation on them at the time, but I didn’t because I was a mess and was frightened,” he revealed to The Guardian.

“It means I have a spooky handshake.”

In earlier films, it is noticeable that there are no apparent symptoms of Dupuytren’s contracture.

The condition typically lasts for months and years and affects both hands. According to the National Institute for Health and Care Excellence (NICE), it affects roughly four percent of the British population.

In another interview, Nighy suggests his condition had genetic origins, although according to NICE the cause is unknown.

“I inherited it from my mother’s side of the family,” he explains to The Northern Echo. “My last two fingers in each hand are permanently bent back against the palms.”

According to the NICE, “northern European descent” is one of the risk factors as well as a “positive family history”, being male and increasing age.

It is a progressive and incurable condition, although there are treatments for it, including surgery that doesn’t stop the disease’s process but slows it down.

For many people, it can cause disabilities in everyday life.

Surgery for the condition, known as a needle fasciotomy involves cutting the hardened connective tissue which is keeping the fingers hooked into position, using a needle.

This helps to straighten out the fingers.

Aside from surgery, another treatment has been developed, which reduces the need to go under the knife.

Xiapex, known as XIAFLEX in the USA, is licensed in the UK. It’s an enzyme based injection which breaks down the diseased tissue – allowing the finger to be easily put into a straighter position.

There are different theories about the specific cause although there is no definitive answer as to its origins.

One theory suggests it is due to inflammation. Studies have found inflammatory cells in the regions of the hand affected by the condition, suggesting this might be accurate.

Researchers have even debated the ‘Viking’ origins of this so-called ‘Viking disease’.

One study, published in the Journal of Hand Surgery in 2020, analysed cases of the condition and suggested there was “no evidence” for an “excess of Norse ancestry in Dupuytren’s disease”.