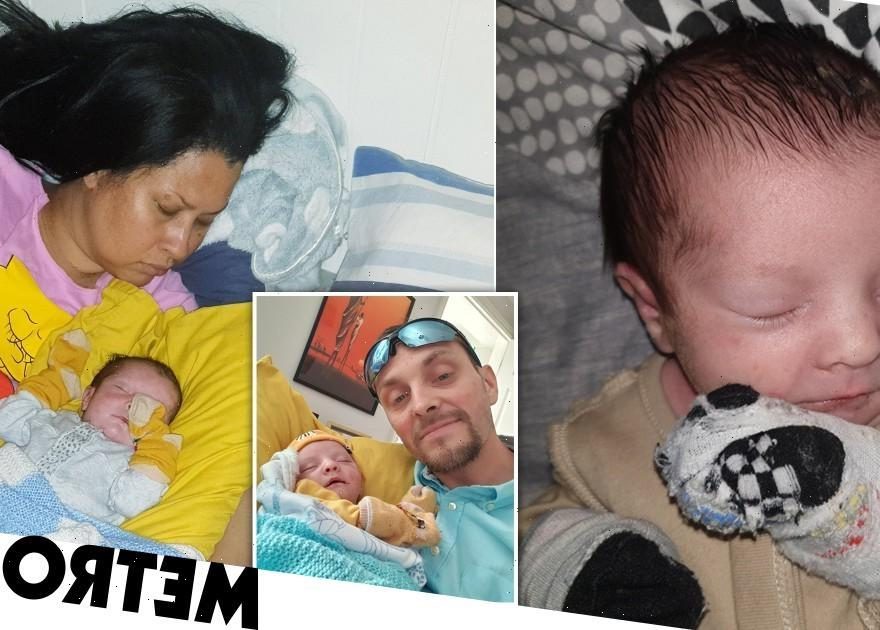 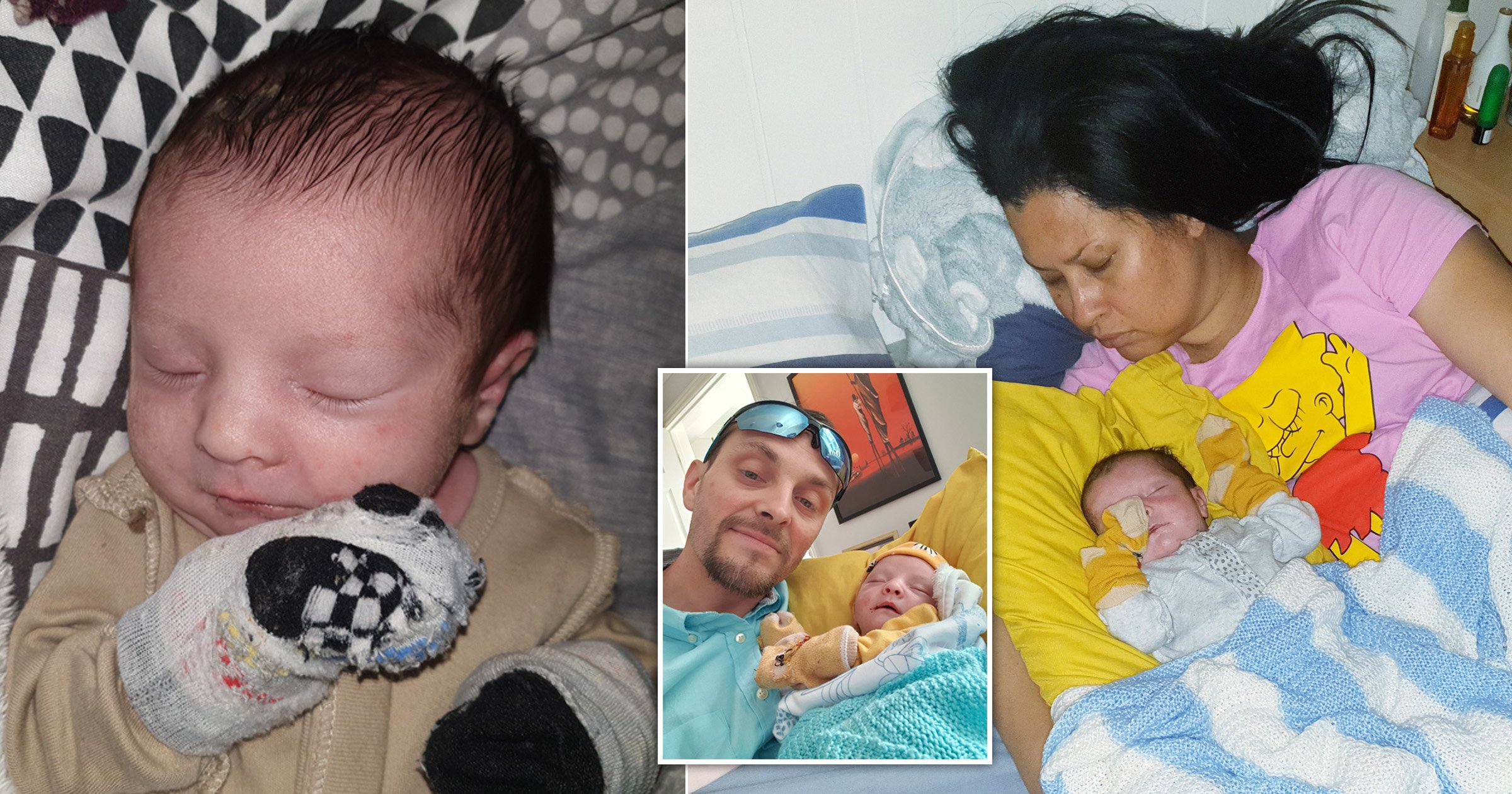 To not be able to cuddle your own baby is the stuff of nightmares.

But for parents Michelle Lobato and Dominic Evans, it’s been a tragic reality.

Their newborn son, Giorgio Evans-Lobato, was born with skin so fragile his parents are afraid to hug him because the slightest touch causes him to have blisters.

The painful welts come up all over his body and leave him ‘looking like Freddy Krueger’. He then needs to be bandaged up to protect him from deadly infections.

The first time Dominic, 37, held his baby, he felt sure ‘something was seriously wrong’ when he saw skin missing from the little one’s back, head and left leg.

Two weeks after Michelle gave birth to Giorgio in June 2022, specialists from London’s Great Ormond Street Hospital revealed the baby had a rare and incurable condition which affects just 5,000 people in the UK.

The cruel version of EB affecting Giorgio also causes internal blistering to his organs – this means he requires 24-hour care.

Determined to help Giorgio survive and live the best possible life, Dominic quit his job as an electrician to help mum Michelle, 43, look after him full time at their home in Chichester, West Sussex.

With both parents unable to work, they set up an online crowdfunder asking for public donations so they can move into a new home suited to Giorgio’s needs.

‘We have been told by the doctors and specialists that he has a low percentage chance of surviving his first two years of life’ said Dominic.

‘So we are hoping we can do everything possible to get him through this.

‘We never expected him to have such a horrendous condition, so it was incredibly emotional. We went from pure joy to fear and confusion and worry.

‘It’s 24 hours a day, so I had to quit my job and sold my BMW car, and we’re just about scraping by with Universal Credit.

‘These months have been so tough on us, but I can’t even imagine how tough it’s been on him. I can see the pain in his eyes.’

This makes the happy moments matter all the more.

Dominic added: ‘Those moments where he is smiling and happy are the best days of my life – and we want to do everything to give him the best chance to live a normal life.’

Giorgio was born by Caesarean section and Michelle had a ‘healthy’ pregnancy. The couple had no idea before Giorgio’s birth he had this condition, which is caused by a faulty gene.

Remembering the moment he met his baby, Dominic said: ‘This should have been the best moment of my life, but I was horrified by what I saw.

‘He had these massive blisters all over his face, his back and his foot.

‘When you see open sores like that you just think about how much pain he’s in, and it broke my heart.’

Medics initially thought the injuries were caused during the birth, and then later thought it a bacterial infection.

When the parents learned the truth, they were ‘scared’.

Struggling to make ends meet on universal credit, the family-of-three are now living a tiny one-bedroom apartment, where there is barely enough space for them to treat Giorgio’s blisters each morning.

Every day, their baby needs a four-hour bath, then to pop and drain the blisters, before covering his body in creams.

Giorgio is then wrapped with special bandages that help to heal the skin quickly and cushion him from anything he might touch.

Dominic said: ‘Our entire lives have been flipped upside-down. Every moment we have is devoted to making sure Giorgio is safe.’

The means he’s in constant agony and has painkillers daily – sometimes he even needs morphine it’s so bad.

Dominic said: ‘He is in excruciating pain every single day – I can see it in his eyes.

‘When he can speak, I will be able to find out where he is hurting.

‘But you can see the trauma in him. When he looks up at me, he doesn’t understand why it’s happening to him.

‘I’ve never been so emotional in my entire life. I’m so scared for when he speaks and tells me just how much pain he is in.’

There is no cure for this condition, which means Giorgio will likely be wheelchair-bound and need constant treatment throughout his life.

For this, the family needs a treatment room and disability adaptions to their home.

Dominic said: ‘We have all of our medical supplies under the kitchen table, there isn’t room anywhere.

‘We’re in such a tight space that it doesn’t feel safe for Giorgio, as any slight touch causes him to blister and potentially have a deadly infection.

‘We are going to get him through this. He is our son, and we will fight to make sure he is safe and he lives the best life he can.’

DEBRA, a national charity and patient support group for people living with EB, said the condition causes people to live in ‘constant and debilitating pain’ and specialist healthcare support is often required.

In a statement, they said: ‘Epidermolysis Bullosa (EB), is an incredibly painful genetic skin blistering condition. It causes the skin to blister and tear at the slightest touch. With skin as fragile as a butterfly’s wings, it is often referred to as “butterfly skin”.

‘EB can affect the hands and feet only or, in the most severe cases, any part of the body, including blistering on the eyes and internal organs.

‘People living with EB live in constant debilitating pain and in severe cases it can be fatal.

‘People living with EB often need specialist healthcare and support, which can include specialist bandaging, gel pillows, changing tables, seamless baby grows, reduced friction shoes etc, plus they benefit from specialist advice from dermatologists, podiatrists, nutritionists, to help them manage the condition as best as they can.’