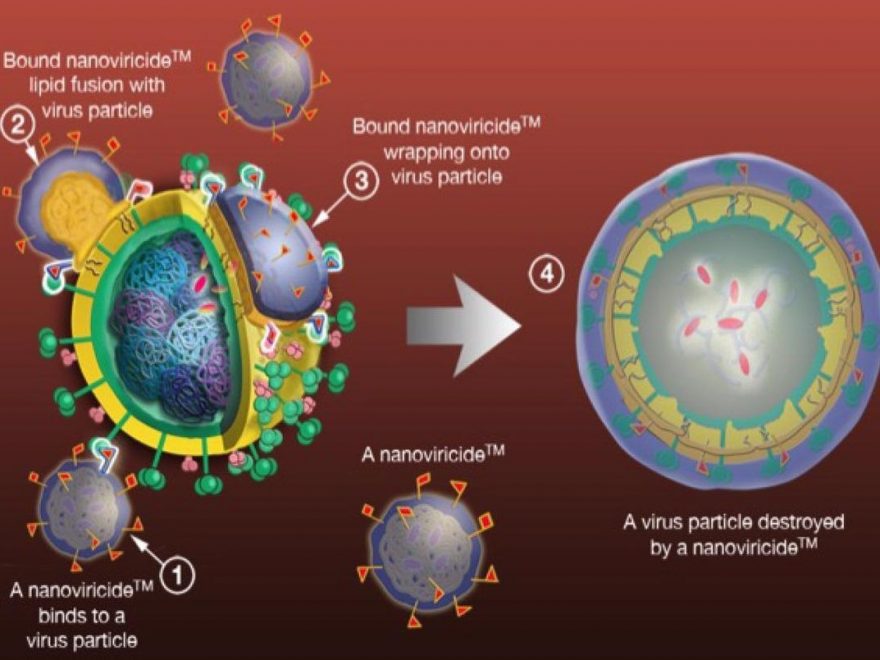 The current coronavirus disease 2019 (COVID-19) pandemic has been caused by SARS-CoV-2, which primarily infects the human respiratory system and has high morbidity and mortality. Until SARS-CoV-2’s emergence, people were commonly infected with human coronaviruses 229E, NL63, OC43, and HKU1.

Scientists are working extensively hard to develop COVID-19 vaccines and therapeutics. In the context of therapeutics, to date, remdesivir (RDV) is the only antiviral drug that has been approved by the Food and Drug Administration (FDA) to treat COVID-19 infection. However, one of the limitations of this drug is its low stability in the presence of plasma.

Scientists have explained that Nanoviricide’s platform technology-based NV-CoV-2 polymer can bind to virus-specific ligands. Two of the main components of this polymer platform are polyethylene glycol (PEG) and alkyl pendants.

Researchers have incorporated different types of virus-specific ligands into the PEGbased polymer backbone to develop drug substances that can specifically target viral pathogens. Viral pathogens bind to these cell surface ligands such that they attach to cells and internalize.

Nanoviricide’s polymer NV-387 (NV-CoV-2) has been designed to be similar to a human cell or, in other words, a decoy that contains many viruses’ specific ligands. Therefore, when a virus encounters such a nanoviricide, it attaches to the specific ligand.

Researchers have pointed out that nanoviricides are flexible and, thereby, assist maximum binding by spreading onto the virus particle. In addition, they promote fusion of the lipid-coated virus surface by a phase-inversion and ultimately lead to engulfing the virus.

For viral infection, the coat protein is essential for establishing the binding of the virus and the host cell. Thereby, when nanoviricides engulf the virus, they cannot infect host cells due to the lack of coat protein. Researchers have explained that the nanoviricide may completely dismantle the engulfed virus capsid. The loss of virus particles can make the virus lose its pathogenicity.

In a new study published on the bioRxiv* preprint server, scientists proposed the aforementioned mechanism of action (MOA) and have validated it using electron photomicrographs of murine cytomegalovirus (MCMV), which were incubated with a nanoviricide.

Furthermore, they reported that the binding of the nanoviricide to the CMV caused losing of the viral envelope that makes CMV non-infectious. Hence, the nanoviricide has a dual function, i.e., it binds with CMV and makes it inactive as well as disrupts capsid organization.

Scientists have also compared the stability of RDV encapsulated with the aforementioned nanoviricide platform technology-based polymer NV-387 (NV-CoV-2) in the presence of plasma in vitro and in vivo. They evaluated the efficacy of NV-CoV-2 (Polymer) and NV-CoV-2-R (Polymer encapsulated Remdesivir) in both NL-63 infected and uninfected rats.

Researchers performed in vitro cell culture model experiment and evaluated the antiviral activity of NV-CoV-2 and NV-CoV-2-R and compared the result with RDV.

NV-CoV-2 (nanoviricide) is a type of nanomedicine capable of attacking most coronavirus strains in a broad-spectrum manner. Using molecular modeling, researchers have developed the nanoviricide.

The ligand on NV-CoV tends to bind to the Spike-protein of SARS-CoV-2 at the site where it would typically bind with the cellular receptor, ACE2. Therefore, this nanoviricide NV-CoV-2 can neutralize ACE2- binding coronaviruses (e.g., SARS-CoV-1, SARS-CoV-2, and NL63).

Also, researchers have found that NV-CoV-2 is active against human coronavirus 229E (hCoV-229E), which uses aminopeptidase N (APN) receptor and not ACE2. This broad-spectrum activity indicates that this drug could remain effective despite mutations.

Although the MOA of NV-CoV-2 is not clear, researchers have hypothesized that it attaches to free virion particles at multiple points and encapsulates the virus, disrupting its ability to infect cells. Thereby, the viral particles get neutralized. The study showed that none of the studied animals developed any adverse reaction when treated with NV-CoV-2.

All the studied groups, including the control groups, showed good tolerance to the drug, and no clinical or behavioral changes were documented. In addition, scientists emphasized that all the treated groups showed no deviation from normality.

Importantly, no adverse reaction was observed during the administration of the compounds, all through the study period or at post-mortem examination. Additionally, analysis of fecal samples and body fluids showed no significant difference between groups, except within the groups treated with a high dose of compounds. Researchers have also reported that histopathological examination revealed no significant changes in any of the organs studied.

This study highlighted that in NV-CoV-2-R, RDV would slowly leak out over time into the bloodstream and provide protection. The rat model showed that this drug is also well-tolerated and safe. The body weight of the rat remained constant with no clinical changes. Additionally, the histopathological investigation showed no adverse effect of the compounds on the studied organs.

This study revealed that platform technology-based NV-CoV-2 encapsulated-RDV drug is safe, well-tolerated, and has a dual effect on a broad spectrum of coronaviruses. Importantly, this drug could remain effective even if the virus undergoes mutations.

Priyom holds a Ph.D. in Plant Biology and Biotechnology from the University of Madras, India. She is an active researcher and an experienced science writer. Priyom has also co-authored several original research articles that have been published in reputed peer-reviewed journals. She is also an avid reader and an amateur photographer.