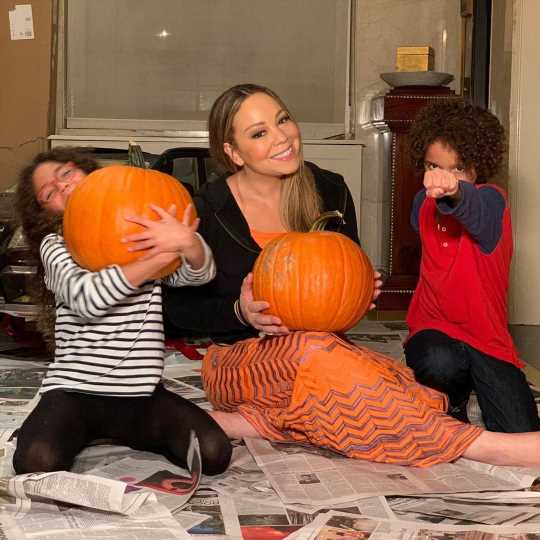 On Thursday, Mariah Carey got in the Halloween spirit with her 8-year-old twins — Moroccan and Monroe — and boyfriend Bryan Tanaka with a spooky pumpkin carving session.

“Halloween – the prequel 🎃,” she captioned the photos on Instagram, making sure to remind her fans that another holiday season is about the begin.

Her son impressively carved Millie Bobby Brown‘s Stranger Things character, Eleven, into his pumpkin, with Carey tagging the actress on her Instagram Story and telling her, “my son is obsessed with you!”

The “All I Want For Christmas Is You” singer, 49, went a different route with her gourd. Carey hilariously carved “Not Yet” into her pumpkin in anticipation for what her fans call “Mariah season” — A.K.A. Christmas.

The singer’s fans were quick to catch her joke, calling her post “hilarious” in the comments section. One excitedly wrote, “MARIAH SEASON STARTS TOMORROW.”

Sure enough, the singer-songwriter is celebrating the 25th anniversary of her chart-topping holiday album, Merry Christmas, this year and plans to commemorate the milestone with an All I Want for Christmas Is You Tour and by re-releasing the album on Nov. 1 — 25 years to the exact day of the album’s original release date.

“MERRY CHRISTMAS is turning 25 and I’m celebrating by releasing a very special 2 CD Deluxe Anniversary Edition on November 1st featuring, for the first time ever, my St. John The Divine performance and more,” the R&B artist shared in a video to her Instagram in September.

Her tour kicks off on Nov. 22 with a run in Las Vegas and will head to the East Coast starting Dec. 7 in Atlantic City before making stops in Washington D.C., Uncasville, Connecticut, and Boston, Massachusetts.

It wraps up on Dec. 15 in New York, New York, at Madison Square Garden with what will be Carey’s first performance of her Christmas show at the famed venue.