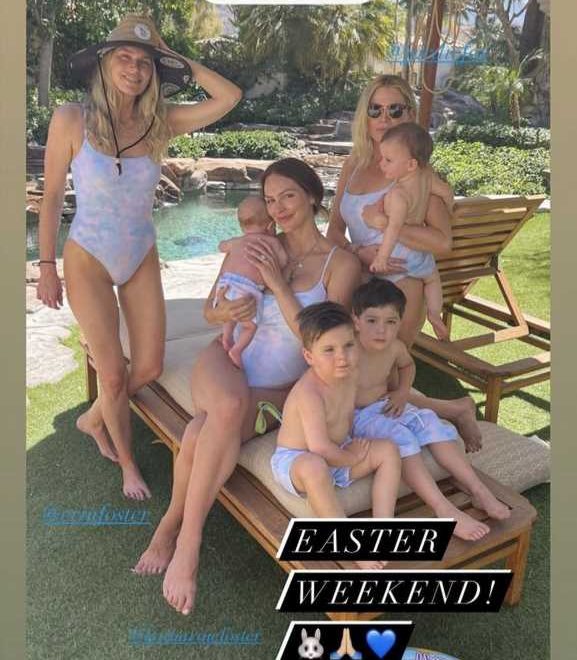 It's a family affair!

On Monday, Katharine McPhee posted an adorable photo with herself and her son Rennie David, whom she welcomed in late February with husband David Foster, wearing matching swimwear created by McPhee's step-daughter Sara Foster.

In the photo, first posted to Sara's Instagram Story, everyone in the group was modeling Sara's tie-dye swimwear line created in partnership with Summersalt.

McPhee, 37, showed off her post-baby body in a one-piece while holding Rennie, who wore a matching pair of tiny swim trunks. Also pictured in the shot were Sara's sisters Erin and Jordan Foster.

"The Foster sisters in Summersalt x SaraFoster," Sara captioned the photo, also noting that the image was from "Easter Weekend." "Best one piece I've ever tried. Usually it's cut too low and the torso isn't long enough – straps are adjustable. So comfortable! You nail it @sarafoster," the star wrote.

Last week, the Smash actress appeared on The Kelly Clarkson Show during which she chatted with host Kelly Clarkson about recently becoming a mom and how the role is the "greatest job" she will ever have.

First asked by Clarkson, 38, if she is tired after welcoming her son in February, McPhee said, "I'm a little bit tired here and there but I find times to nap," before adding, "He's such a good little baby and I'm so in love … It's my greatest job I'll ever have."

It will also be "the hardest," Clarkson told the Country Comfort actress, pointing to instances with her own children and having to discipline them, despite them being "so freaking cute."

"My girlfriend, who was doing my hair today, she was like, 'Can you even imagine that you're going to have to get mad at him one day?' and I'm like, 'No, he's so sweet right now. I can't imagine,' " McPhee said.

McPhee and David tied the knot in June 2019 after first meeting in 2006, when David, 71, mentored McPhee and other contestants on season 5 of American Idol.