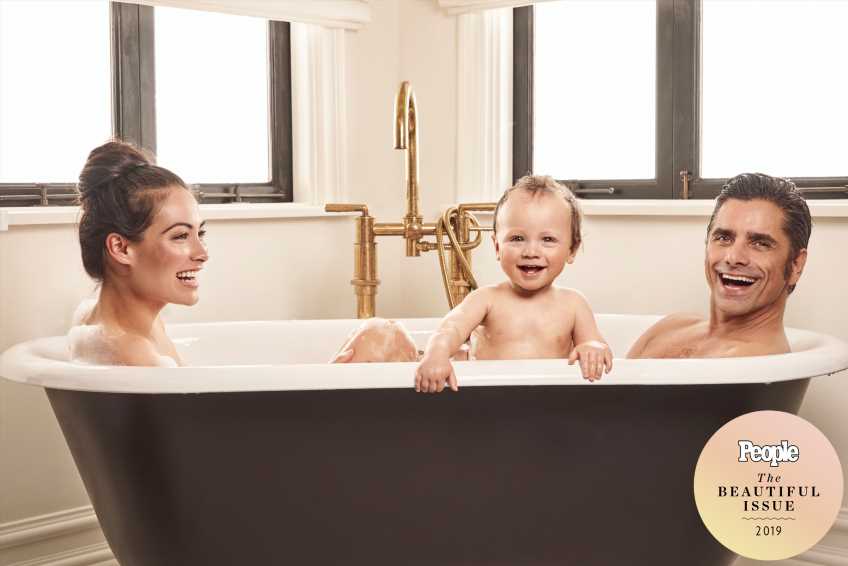 Their son William “Billy” Christopher is now a year old, but John Stamos and his wife Caitlin McHugh Stamos won’t soon forget the memorable way he entered the world.

“It all started when [Caitlin] had contractions, [but then] we went to the doctor and he said, ‘It’s not ready, why don’t you go home and have a glass of wine?’ ” Stamos tells PEOPLE for The Beautiful Issue, on newsstands Friday.

“She normally doesn’t drink, and hadn’t drank for nine months … she had one glass of wine and she was hammered,” he jokes of his wife.

Recalls Caitlin, “It was really funny. I get to the hospital and I said, ‘I already had a glass of wine, now it’s a party!’ Then they gave me the epidural and I was laughing all over the place.”

John Stamos Might Just Be the Hottest Dad in Hollywood, and We Have the Photos to Prove It

Still, despite the celebratory mood, Billy arrived nearly six weeks early — and Caitlin and the Fuller House star, 55, reveal that it took time to adjust.

“He wasn’t fully baked, so that was very scary in the beginning,” says Caitlin. “He was very, very small … fragile, little. Every time [he] fell asleep, you’re like, ‘Please wake up.’ [We were] constantly checking to make sure he was still breathing.”

But parenting came pretty easily to the couple, who wed in 2018, two months before Billy’s arrival. “I waited a long time for a kid,” says Stamos. “I just had to meet the right person to do it with, and to straighten my life out. I was always meant to be a father, I think.”

Adds his model and actress wife, 32, “He’s a natural. He would joke around about how he was never going to change a diaper, but he’s pretty good at it!”

And these days, Billy is keeping them busy — and entertained.

“He’s such a happy, giggly guy,” Caitlin tells PEOPLE. “Fake sneezes make him laugh. But not real sneezes. Real sneezes kind of freak him out.”

Quips Stamos, “And he’s a hambone. I don’t know where he gets it from!”

For more from John Stamos and other celebrity families, pick up The Beautiful Issue of PEOPLE, on newsstands Friday.