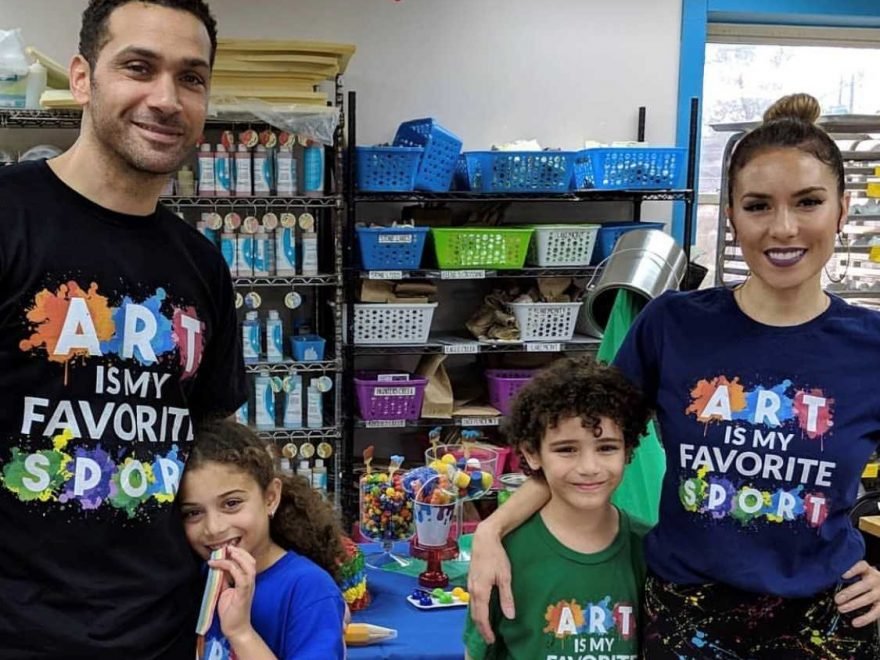 Cole, an anesthesiologist and mother of two, splits her time between Orlando, Florida, and Los Angeles, where she’s starring on the inaugural season of Married to Medicine: Los Angeles. Aside from appearing on the hit Bravo series’ new spin-off, she is currently working on finding permanent medical employment on the west coast.

Before she became an anesthesiologist, Cole worked as an officer in the Navy alongside her best friend, Married to Medicine: Atlanta star Dr. Contessa Metcalfe.

Cole and husband Mack Major share two children: Ivy, 7, and Mack Jr., 8. You can find her on Instagram @brittencolemd.

Word on the street is that only a “Bad Mom” would travel out of state for a job, leaving her family behind. The problem with this antiquated stance is that nowadays most women are pulling half the financial weight in their households, and a growing number are the primary breadwinner. That said, it’s not at all uncommon that women have careers requiring them to travel for work, spending less time with the families that depend on them.

So if “Bad Moms” travel for work, then I am one of them since I left the nest to split my time between two cities. After my husband and I made the decision to move from one coast to the other, we decided that I would go first to find a permanent position in my field.

I was also to find our new home, new community, new school … everything. As an anesthesiologist, I can easily find temporary work that affords me the flexibility of living bi-coastal. But I can tell you, most people just couldn’t understand why on Earth I would do such a thing. As a physician, my salary and my input on the course of our family’s well-being matters greatly. But I quickly learned that in the eyes of most everyone else, I was viewed as just plain selfish.

Though my situation was temporary and agreed upon by my husband and me, it seemed to quickly escalate to everyone else’s business. The judgment I faced and the self-inflicted guilt became consuming. The ironic thing, though, is that my husband had been traveling for years for work and no one even batted an eye. No one questioned his motives. No one asked if he was worried that his wife might cheat. They didn’t inquire how he dealt with missing out on his kids’ performances, activities or day-to-day growing up. When these questions started flying my way, I was taken aback. Initially, this double standard had me second guess how fair I was being to my family, but then it made me furious!

So I challenged everyone, including myself, to reexamine a woman’s role in the workplace and household and to allow women the freedom to stretch beyond the ideologies of an archaic and often misogynistic society. I gave no energy to those who constantly harassed me about the possibility of infidelity, as if a man only cheats when his wife travels for work. “I certainly have no time to babysit a grown man,” I’d say.

I also didn’t acknowledge people’s opinions that I was an absentee mother. My children and I were more attentive to one another now than ever before. I had no interest in entertaining remarks of how my poor husband was overwhelmed with housework in my absence, especially since no one cared how busy I was when it all fell on my lap during his travels. Still, I outsourced every menial task I could to lighten his load.

To make this cross-country family dynamic work, I decided there were three things I had to do to survive:

Elisabeth Röhm’s Blog: The Real Reason I Took My Daughter on a Road Trip Through Iceland

Though this experience was physically and emotionally draining, it’s certainly not impossible, and it doesn’t need the added stress from haters. And with women entering the workforce at record numbers, traveling for work is just a reality that folks will have to get used to.

Want to know what kind of woman travels away from home? Look around you. These phenomenal women are everywhere. They’re pilots, military personnel, students, physicians, sales reps and engineers, to name a few.

So ladies, you have to do what works for you and your family, and not what you think works for hers or theirs.