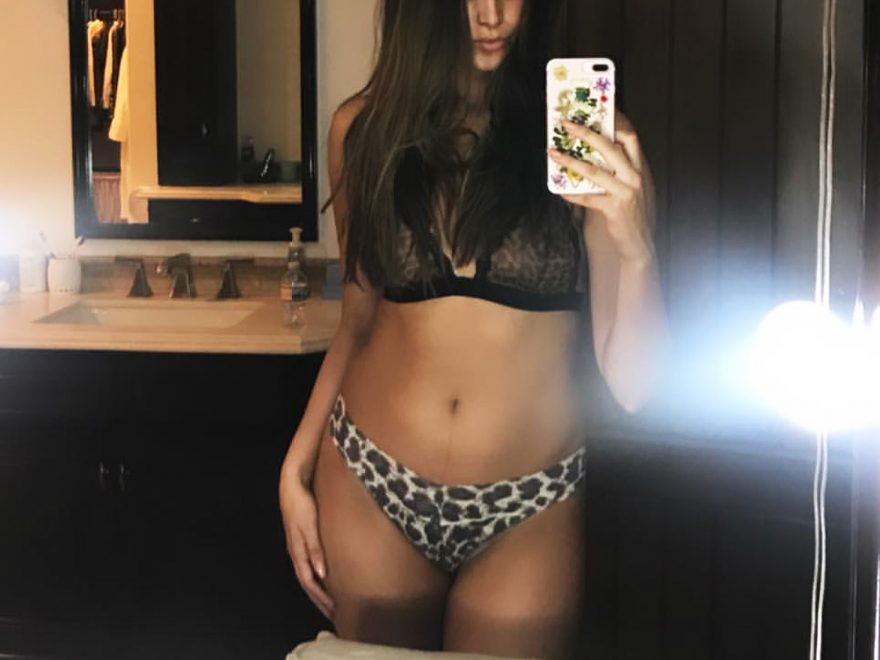 April Love Geary is celebrating her body after giving birth to her second child.

A little over six weeks after she and fiancé Robin Thicke welcomed their younger daughter Lola Alain, the 24-year-old model shared a bathroom-mirror selfie to Instagram to show off her figure.

Geary posed in only a black bra and leopard-print bikini-style underwear for the shot, putting her midsection on full display and letting her long dark hair hang down over her shoulders.

“6 weeks postpartum,” she wrote over the top of the image.

Diane Kruger Shows Off Toned Abs Months After Giving Birth: “I Didn’t Think it Was Possible”

Sharing a black-and-white father-daughter photo from the hospital, the singer wrote on Instagram, “Thank you God and April Love for this blessing!” tagging his fiancée and tacking on the hashtag, “#fatherofthree.”

The couple welcomed now-13-month-old daughter Mia Love on Feb. 22, 2018, while The Masked Singer panelist is also father to son Julian Fuego, 9, from his previous marriage to actress Paula Patton.

Lola’s middle name is a sweet nod to her late grandfather, actor Alan Thicke, who died in December 2016 at the age of 69.

From baby-bump photos to posing in the nude while pregnant and getting real about breastfeeding, Geary hasn’t shied away from being open about her body on social media.

After clapping back at a critic of a breastfeeding photo she shared weeks after Mia’s birth, she posted a throwback snap taken the first time her older daughter “latched onto [her] nipple” — which happened “instantly,” she revealed.

“It’s such a shame that the world sexualizes a woman’s breast so much. Boobs are for babies, not your husband,” wrote Geary. “And to the women who can’t have babies/breastfeed/etc, your boobs are yours. Your body is yours. If you can’t breastfeed, you are no less than someone who can.”

“Every mothers journey is going to be different but that’s what makes our lives so special,” she added.