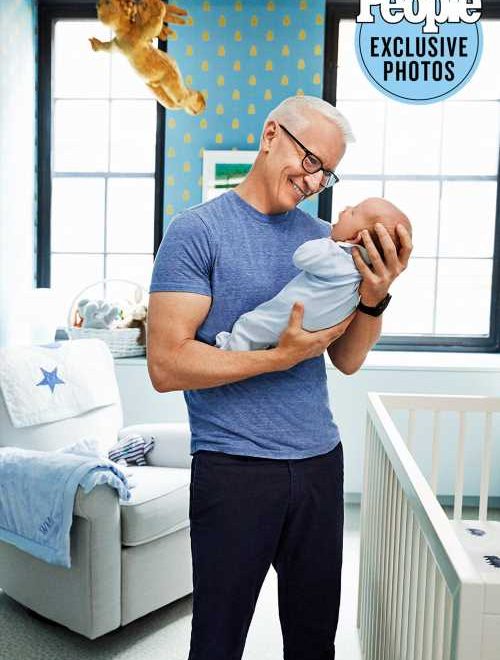 The CNN anchor, 53, and his 6-week-old baby boy grace the cover of this week's Pride issue of PEOPLE, where Cooper opens up about becoming a dad and how his own parents — writer Wyatt Emory Cooper and heiress and fashion designer Gloria Vanderbilt — inspired him on his road to fatherhood.

"I feel like the spark of recognition between my mom and my dad that occurred had these two people who were from completely different walks of life," Cooper tells PEOPLE. "My dad grew up very poor in Mississippi; my mom, obviously, grew up the way she did."

"[So to] have them meet and fall in love and create a family of their own and have this little family of ours … it made me really sad to think that I'm the only person left from that union [of my parents] and that I'm the only person left who remembers all those stories of my mom, my dad and my brother," explains the longtime journalist. (His father died during heart surgery when Cooper was 10, his mother died last year and his older sibling Carter died by suicide in 1988 at age 23.)

"I wanted to have a child who came from that and grew up knowing about that. That's why I chose to do it the way I did it," adds Cooper, who welcomed baby Wyatt via surrogate on April 27.

Never miss a story — sign up for PEOPLE's free daily newsletter to stay up-to-date on the best of what PEOPLE has to offer, from juicy celebrity news to compelling human interest stories.

Cooper — who is planning to raise baby Wyatt with his ex-partner, Benjamin Maisani, as a co-parent — calls surrogacy an "incredibly expensive," "difficult" and "time-consuming" process.

But at the end of the day, he couldn't be more thankful for it.

For more from Anderson Cooper, pick up this week's Pride issue of PEOPLE, on newsstands Friday.