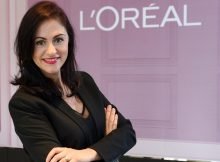 L'Oréal USA has appointed Nathalie Gerschtein as president of its consumer products division.
Gerschtein will officially start her new role overseeing all of L'Oréal's consumer brands in the U.S. market on March 1, less than a year after she was tapped as president of the Maybelline, Garnier and Essie brands, which WWD reported last summer. She is succeeding Michel Brousset, who "has decided to pursue entrepreneurial activities outside of the L'Oréal Group," according to a statement from the company.
Alanna McDonald has been appointed as president, Maybelline, Garnier and Essie, taking over for Gerschtein. McDonald is president of the consumer products division for L'Oréal Canada.
Gerschtein is the first woman to run the consumer products division at L'Oréal USA. This appointment makes her one of the highest-ranking women executives at Hudson Yards. She is a L'Oréal veteran, serving in various roles in different international markets over the course of 16 years. Before beginning work in the U.S. in June, she was country manager of L’Oréal Thailand, and prior to that served as that market’s consumer products division general manager. During her tenure there, Thailand became L’Oréal’s strongest business in the South Asia market. Prior to working in Thailand, Gerschtein held marketing and management roles on L’Oréal Paris and Garnier in India and France.
“Nathalie’s business acumen and vast experience within the consumer products division will be a critical asset in driving strong acceleration of our omnichannel strategy,” said Frédéric Rozé, president and chief executive officer of L’Oréal USA and executive vice president of the Americas zone. ”Her expertise in e-commerce, her vision to reinvent the in-store environment and her deep knowledge of the very strategic skin-care category make Nathalie the perfect candidate to realize the modern, strategic direction of the Consumer Products Division in the U.S.”
L'Oréal's consumer products division includes L'Oréal Paris, Garnier, Essie, Maybelline, NYX Professional Makeup, Carol's Daughter and Softsheen-Carson.
Brousset's departure comes at a turbulent time for the mass market in the U.S., as consumers increasingly opt to shop in specialty and online channels, rather than the drugstore aisles.
Mass makeup sales have been particularly challenged, though L'Oréal's stable of brands in the category — Maybelline New York, L'Oréal Paris and NYX Professional Makeup — has remained a consistent outlier, regularly tracking positive sales growth versus overall category decline. In the less struggling skin and hair categories, Garnier has been a strong performer, thanks to on-trend franchises such as Whole Blends and SkinActive.
Nielsen data tracking the four weeks ending Jan. 12 put mass beauty as up 1 percent, with L'Oréal's portfolio up 4 percent. Competitors — including Coty, Revlon and E.l.f. — were all in decline.
The executive change-up is just the latest in a slew of high-level departures from consumer beauty divisions at companies in the U.S. market. On Friday, WWD reported the exit of Coty's global chief marketing officer of Cover Girl and Sally Hansen, Ukonwa Ojo, just a week after the departure of the consumer division president Laurent Kleitman, who was replaced in his role by ceo Pierre Laubies.
Brousset is the latest L'Oréal exec to depart the company for an entrepreneurial or private-equity-backed venture. In September, former NYX global brand president Nathalie Kristo left L'Oréal for her new post as U.S. president of Huda Beauty. Former NYX ceo Scott Friedman now sits at the helm of Bellami, an Instagram-friendly hair extension brand.
Source: Read Full Article