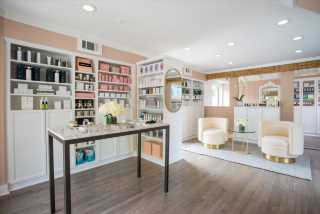 Knockout Beauty is expanding its footprint on Long Island.

The skin care consultancy and boutique is opening its first franchised location, in Locust Valley later this month. While it already has a location in Bridgehampton, N.Y., its founder, Cayli Cavaco Reck, is betting on pandemic-induced migrations to drive her business’ expansion.

“[The pandemic] forced modern times upon us,” Cavaco Reck said, saying the exodus from city hubs has created new markets for prestige beauty. “I call it ‘urban exit,’ and it has lent itself to pockets of clients in areas outside of metropolitan areas. As for why Locust Valley, Knockout Beauty is a community-driven store. I knew it would be able to live there.”

Knockout Beauty also has a location in Los Angeles, where Cavaco Reck has built up a local following. “We are in Brentwood, which has a similarity to Locust Valley in that it’s almost like a suburb of L.A.,” she said. “We’re not in Hollywood, we’re not in the hills. So, we already had that model.”

Cavaco Reck is faithful in a franchise model, which according to a statement from the company, is targeting other areas in California, New York, Illinois, Texas and Florida. “Many of the women who love Knockout Beauty are in a position to be franchise owners, and want to join the workforce again,” she said. “You have this opportunity with Knockout to start your own business, and a lot of the franchises that are available in the world right now are fitness-driven or craft-driven.”

They Are Wearing: Springtime Fashion in and New York, Los Angeles, and Austin

Although brick-and-mortar was hit hard in 2020 — Knockout Beauty’s location in New York City is still closed — Cavaco Reck also stood to benefit from the migration to digital. “We’ve been doing virtual consultants for five years, so when I think about moving virtually, we’d already been doing it for a period of time,” she said.

Knockout Beauty’s consumer, however, is focused more than ever on other hot spots in prestige beauty, such as hair care, skin care treatments and devices. “We have seen people wanting to expand their routines,” Cavaco Reck said. “We’ve also seen a spike in interest in eyes, since what you’re seeing above the mask are eyes and hair.”

While she stocks brands with luxury price points like Dr. Barbara Sturm and MBR, Cavaco Reck is bullish on new demographics of customers as her stores become more widespread. “Knockout Beauty is often seen as only being for affluent women, which is not the case,” she said. “When you look at our online clientele, that’s not the case. As we look at where we want to go, somewhere with community, the assortment could shift to fit those needs.”

For more from WWD.com, see: