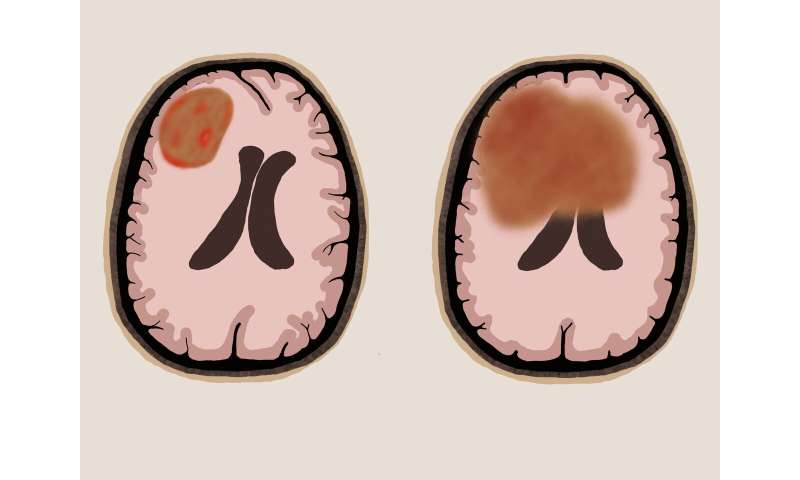 Through a systematic review of published studies going back 50 years, Johns Hopkins Medicine researchers say they have identified a distinct subtype of primary central nervous system (PCNS) lymphoma that should be considered for surgical removal, suggesting a major shift in how this type of tumor is evaluated and managed.

Treatment for PCNS lymphoma—a rare but aggressive form of cancer in the brain that involves infection-fighting immune system cells—has traditionally been biopsy, radiotherapy, and high-dose chemotherapy with methotrexate, but surgical resection has not had a role because of the risk of damage to healthy brain tissue.

PCNS lymphoma is a form of non-Hodgkin lymphoma confined to the brain, eyes, spinal cord or tissues that cover the brain and spinal cord. It accounts for 1%-2% of central nervous system tumors, or approximately 1,400 new cases in the United States each year. It more often strikes the elderly and immunosuppressed. Ten-year survival is estimated at 10%-13%.

In a report on their study, published March 20, 2019, in World Neurosurgery, researchers from the Johns Hopkins University School of Medicine and Johns Hopkins Kimmel Cancer Center describe two subtypes of PCNS lymphomas easily distinguishable by MRI—one that is superficial and localized that might be considered for surgical removal and another that is deep-seated and diffuse and likely not suited to surgery. They estimate that about 20% of patients have the localized type of tumor and hold the potential for cure with surgery followed by treatment with methotrexate.

To see if that was the case, the researchers performed what they described as a comprehensive and systematic review of studies of PCNS lymphoma published between January 1968 and May 2018 on patients who had biopsies of their tumor or surgeries to remove them. They tracked treatment, side effects, progression-free survival and overall survival, comparing the outcomes and complications of patients who had biopsies only with those who had surgical resections.

Overall, they identified 1,291 citations and 244 manuscripts, and selected information from 24 for a focused data review. The selected studies included information on 15,280 patients and met certain criteria, such as involving human subjects, including data on at least five patients, reporting primary data, and providing survival or complication data on stereotactic biopsy versus resection of PCNS lymphoma.

Of the 24, 15 older, smaller studies that included largely single-institution retrospective studies found no benefit from surgery to remove some or all of the tumor. The most prominent was a 1990 study that confirmed the benefits of methotrexate, but cited post-operative complications in 4 of 10 patients treated, and concluded that surgical treatment was not recommended.

Nine larger and more recent studies, including a 526-patient randomized German clinical trial published in 2012, found surgery beneficial in select patients, particularly when the tumor was well defined and located in more superficial regions of the brain, and in younger patients.

Since the 2012 study, five other studies began to reveal differences among PCNS lymphoma subtypes and a potential role for surgery, according to study leader Debraj Mukherjee, M.D., M.P.H., assistant professor of neurosurgery and director of neurosurgical oncology at Johns Hopkins Bayview Medical Center.

“What our study showed us is that we really should be thinking about PCNS lymphoma as two types of tumors with different methods of treatment for each,” Mukherjee says. “Surgery to remove the superficial, localized types of tumors does not seem to put patients at greater risk and also improves outcomes for these patients, while the larger, deeper tumors are not suited for surgery because of their location near the ventricle system in the brain.”

The researchers say the identification of two different subtypes of PCNS lymphoma explains the discrepancies among the older studies that found no overall benefit to surgery and the newer studies that did. “The older trials never delved into this question of size, type and location of tumor,” explains Mukherjee. “It was thought that these tumors were all diffuse and multifocal, and too difficult to remove with surgery without increased risk to patients.”

The researchers call for more prospective studies to better define the role of surgery in treating PCNS lymphoma.