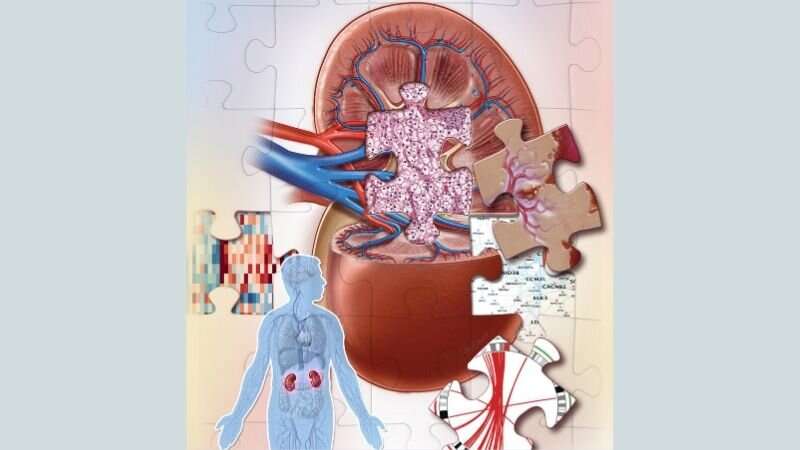 The researchers used the most advanced genomic and proteomic technologies available to tease out their proteogenomic characteristics, defined as genetic makeup (genomics), chemical modifications to DNA (epigenomics), messenger RNA located in cells that serves as template to make proteins (transcriptomics), and proteins (proteomics) and their modification by phosphate group (phosphoproteomics), a modification known to regulate protein functions by switching on or off. The work was completed as part of the National Cancer Institute’s Clinical Proteomic Tumor Analysis Consortium (CPTAC), a national effort to better understand cancers through proteogenomics.

Among their findings, investigators say, was that the loss of chromosome 3p is an apparent hallmark of ccRCC, occurring in almost all of the tumor samples in the study.

In addition, the researchers identified four distinct immune-based subtypes of ccRCC based on their immune cell differences that potentially could be used to help predict patients’ overall survival and response to treatment.

Among all kidney cancers, ccRCC accounts for 75%, equating to about 65,000 new cases annually. Surgical removal remains the only effective treatment for cancers that have not spread beyond the kidney, but 30% of patients present with advanced disease at diagnosis.

“Historically, ccRCC has been considered resistant to conventional chemotherapy and radiation, and response to several FDA-approved drugs has been limited,” says Daniel W. Chan, Ph.D., a professor of pathology and oncology, and director of the Center for Biomarker Discovery and Translation at the Johns Hopkins University School of Medicine. “The National Cancer Institute’s The Cancer Genome Atlas (TCGA) has catalogued genetic alterations responsible for many cancers including ccRCC, but questions remained.”

“Our results illustrate the complexity of cancer development, and that we can use proteomics and phosphoproteomics in addition to genomics to learn more about cancer phenotypes and their heterogeneity,” says Hui Zhang, Ph.D., co-principal investigator of the study, professor of pathology and oncology, and director of the Mass Spectrometry Core Facility at the Johns Hopkins University School of Medicine.

“The use of one type of molecular study to understand cancer is no longer enough. A multi-omic approach is needed to fully characterize cancer,” says lead study author and postdoctoral fellow David J. Clark, Ph.D.

Currently, Clark adds, frontline treatment for ccRCC that cannot be cured surgically is focused on inhibiting angiogenesis, the process by which cancers develop new blood vessels to maintain nourishment and growth, and targeting a protein kinase called mTOR that helps control cell survival and division. Overlaying the proteomic and phosphoproteomic data makes it possible, he says, for researchers to detect a wider array of potential targets for new drug development.

Other key findings of the analysis found that:

There were four distinct subtypes of ccRCC based on their tumor microenvironment signatures:

“Overall, this study reveals unique biological insights that are gained only when combining complementary proteomic and genomic analyses,” says Zhang. “Our multi-level omics analysis identified underlying molecular mechanisms that are not fully captured at the genomic level, and defines protein phosphorylation and immune signatures necessary to stratify ccRCC patients with the goal of developing better, more targeted therapeutic interventions.”